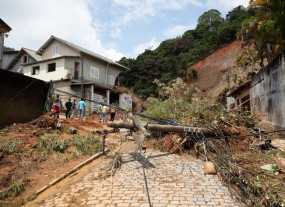 Digital Desk, Brasilia. The death toll in the city of Petropolis in the Brazilian state of Rio de Janeiro has risen to 78 people, including six children.

Rio de Janeiro state governor Claudio Castro told reporters after visiting the disaster zone that he had 240 millimeters of rain in just two hours , it was the highest rainfall since 1932.

Nearly 50 slides have been caused by torrential rains on Tuesday in the city of mountains located 68 kilometers from Rio de Janeiro city, Xinhua news agency announced.

In just 6 hour, Petropolis received more rain than was expected for the entire month of February. This prompted the city’s mayor’s office to declare a public state of catastrophe.

The Civil Defense Secretary for the city Gil Kempers said earlier at an announcement that 21 people were taken care of and that the exact number of missing persons is not yet known.

Nearly 500 pickup trucks are now getting to Petropolis with donations to help evacuate.

In the meantime, the city is being warned of rain coming on Thursday and Friday during the season of rain in the region of the southeastern part of Brazil.